In the recent decade, the Arctic regions have attracted a lot of attention by national states, investors, media, scientific community and public. Successful development of the Arctic have to rely on high quality socio-economic information. We introduce Business Index North project directed to study of Barents Euro-Arctic region. Our chief argument is that economic development of the region has to be analyzed in relation to social indicators. Using examples of two northern regions, Nordland and Murmansk Oblast’, we demonstrate evaluations of socio-economic sustainability.

In the recent decade, the Arctic regions with their extremely rich yet somewhat difficult to get natural resources have attracted a lot of attention. Developing the High North has become a key issue in the governmental strategies of the Arctic Countries: Russia, Norway, USA, Canada, Finland, Denmark, and supranational organizations like the EU [1]. Even non-Arctic countries such as China, Singapore, Japan have developed active approaches to the region. International corporations, including oil and gas, shipping and shipbuilding firms, and other related companies have increased their activities in the circumpolar Arctic. Total value of planned Arctic infrastructure projects estimated by a global investment and advisory firm Guggenheim Partners is about 450 Billion USD[1] [2].

As stated in the Arctic Investment Protocol [4], The Arctic is a diverse, rapidly changing and environmentally sensitive region and an emerging global investment opportunity. To balance these dimensions, the Investment Protocol of the World Economic Forum Global Agenda Council on the Arctic aspires to promote sustainable and equitable economic growth in the region that furthers community well-being and builds resilient societies in a fair, inclusive and environmentally sound manner.

Decisions about sustainable development of the Arctic need to be supported by high quality socio-economic analytic information. In this paper we are presenting and discussing examples of such information developed in the project Business Index North (BIN)[2]. The project has so far focused on the European part of the Arctic Region – the area often referred as Barents-Euro-Arctic Region. In doing so, we are going to address a question – is economic development of the Euro-Arctic region socially sustainable?

2. BIN project and study of the Barents Euro-Arctic Region

Business Index North (BIN) is a project that contributes to sustainable development and value creation in the Arctic. The overall goal is to set up a recurring, knowledge-based, systematic information tool for stakeholders such as businesses, academics, governments and regional authorities, as well as media, in the Arctic states.

The recent “Business Index North” periodic analytical report, published in spring 2018, focused on socio-economic developments in ten regions in the Barents Euro-Arctic: Finnmark, Troms, Nordland of Norway, Norrbotten and Västerbotten of Sweden, Lappland, North Ostrobothnia, Kainuu of Finland, and Murmansk Oblast’ and Arkhangelsk Oblast’ of North-West Russia [3]. Altogether, these 10 regions are referred as “BIN area” (figure 1 below). Definition of the BIN area correlates with the EU concept of a macro-region – an area including a territory from a number of different member states or regions associated with one or more common features and challenges. The BIN area runs across national borders and has common characteristics, challenges as well as opportunities for international cooperation. 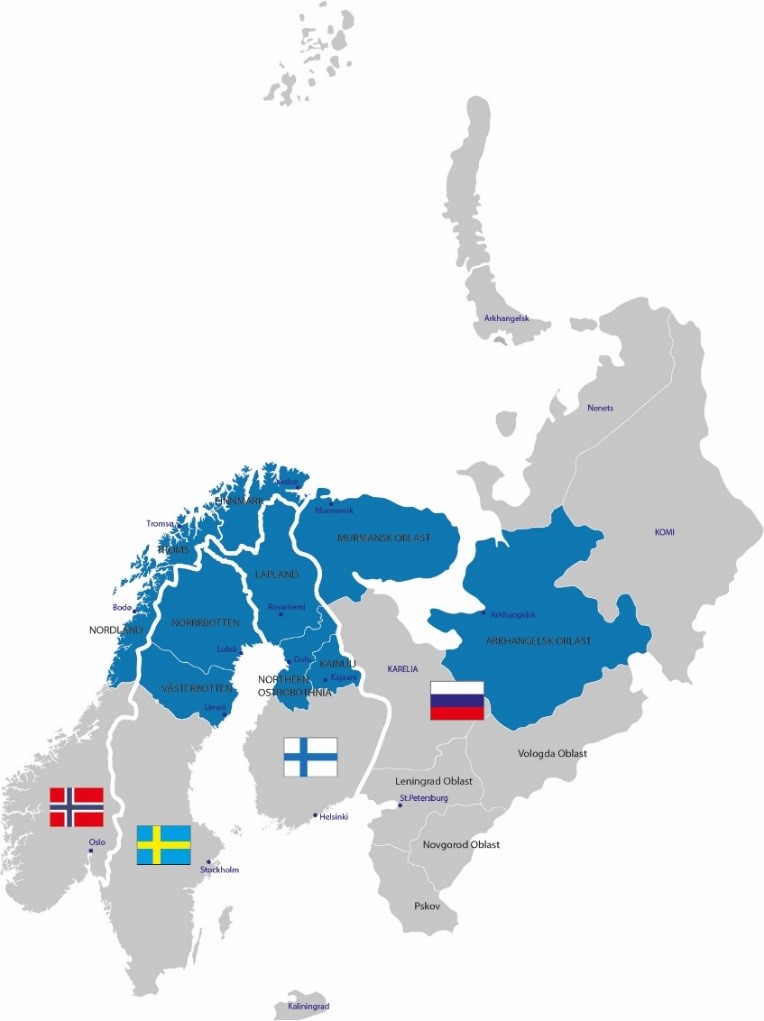 There are about 3,56 million people living in the BIN area. Total contribution of the BIN area to economic value creation for Norway, Sweden, Finland, and the North-West of Russia taken together is 7%. While BIN value creation is growing, there are negative societal trends in many parts of the area.

Seven of ten BIN regions demonstrated economic growth. All of these seven had either negative or relatively weak growth of population. This brings in mind a big question if economic development in the European Arctic is socially sustainable. Now, let’s have a close look at two of BIN regions.

Work brings purpose to human life and creates financial security. On a country level, employment contributes to economic growth. In analyzing the prevailing situation in the BIN area, one must keep in mind the historically strong agriculture, forestry and fishing and mining, quarrying and manufacturing sectors providing employment in the BIN area. The nature of work is changing all over the world towards services sector, and with the proliferation of digitalization and automation. How is this in the BIN area, which has traditionally been the supplier of raw materials and a provider of associated jobs? Figure 4 and 5 below show estimates of net job creations and losses by industry for regions of Murmansk and Nordland county during the period 2011-2016[5].

In total, about 6200 new jobs were created and 2900 lost in Nordland during the 5 year period from 2011 to 2016. The two biggest sectors for job creation were Construction and Trade. Growth of jobs in various services sectors confirm that Nordland follows global trends of economic development. There was loss of jobs in traditional sectors such as Manufacturing and Agriculture. The biggest number of job losses was in the sector of Transportation.

Murmansk Oblast’ experienced dramatic reduction of about 43000 jobs in 2011-2016. Traditional sectors such as Manufacturing and Mining lost about 20% of these jobs. The biggest sectors of job losses were Transport and Trade. However, such sectors with job losses as Mining, Fishing and Aquiculture, and Health care were drivers of economic growth – they became more efficient. Increase in number of jobs (910) in the sector of Hotels and Restaurants indicates growing tourism sector in the region. There were 2393 new jobs in the sector of Real estate, renting and business services. This is small but positive sign of growing service sector for highly qualified specialists. 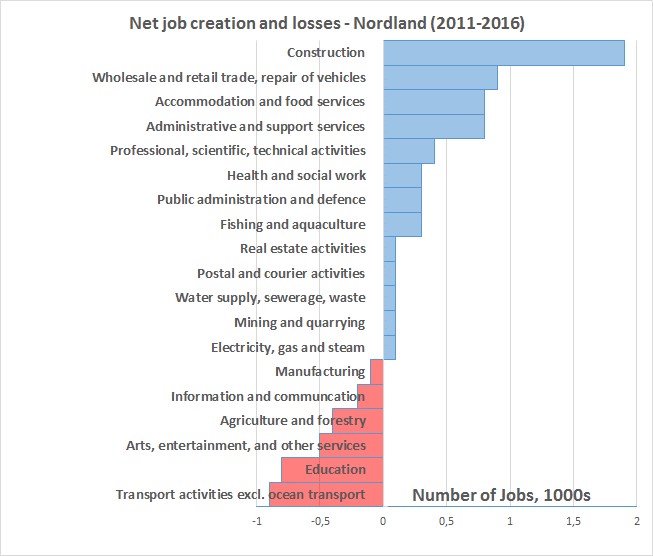 Figure 4. Figure 4 shows estimates of net job creations and losses by industry for regions of Nordland county during the period 2011-2016 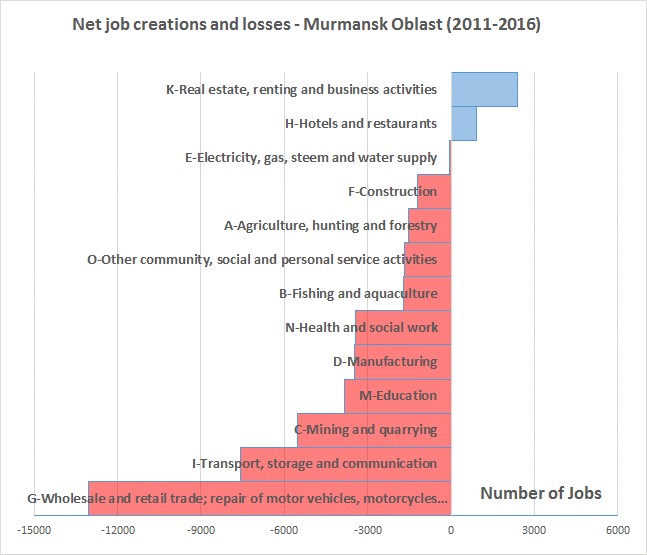 Figure 5. Figure 5 shows estimates of net job creations and losses by industry for regions of Nordland county during the period 2011-2016

We then compared each industry to an ideal situation of equal shares of charged labor resources and created economic value. Based on this analysis, we identified there types of industries for each region: 1-Industries in socio-economic balance – those with nearly equal percentage shares of charged labor and created value; 2-Industries consuming more labor for less economic output; 3-Industries giving high economic return with low or negative contribution to job creation. Tables 1 and 2 below outline these industries for both regions. 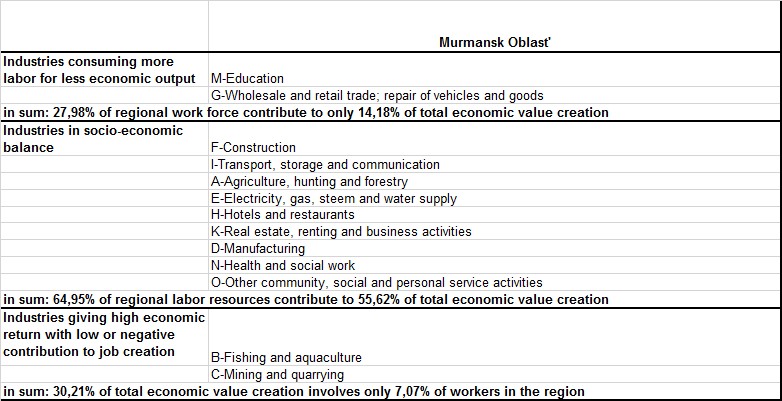 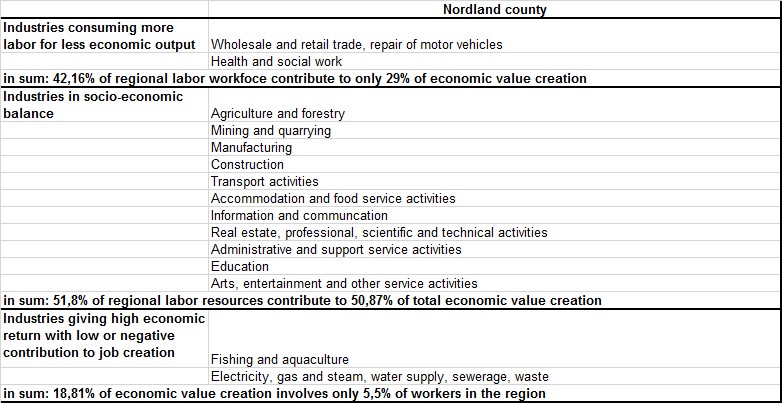 Comparing the two regions, we can see that industries of the first type are either Trade or state sector of Education or Health care. The latter, if deviates too much from the socio-economic balance would be a subject to increased political pressure for economic efficiency. The former has normally high level of competition. Type three industries are those based on natural resources. If they bring high economic values with less contribution to employment, they would need efficient regulation, perhaps in form of taxation.  Comparing type two industries, it looks like county of Nordland has better socio-economic efficiency than Murmansk Oblast’. In Nordland these industries have nearly 50/50 distribution of workforce and created economic value while in Murmansk they accommodate about 65% of workers with impact as 55% to regional gross value added.

Decisions about development of the Arctic regions have to be supported by high quality socio-economic information. Economic growth has to be measured and considered in relation to indicators of demographic situation and employment. Possible criteria to assess socio-economic sustainability are indicators of net job creations and losses by industry over time, as well as measurements of socio-economic efficiency. The latter includes two-dimensional assessment of industries – their shares in economic value creation and employment for the whole region.

Socio-economic information has to be presented and analyzed in comparative perspective – comparing Arctic regions to each other across countries, comparing Arctic regions with their national situation and performance. Furthermore, identification of macro-regions, such as BIN region running across countries appears important. Macro-regions deserve coordinated policy measures and can benefit from cross-border cooperation and large investment projects, e.g. transport or digital infrastructure.

Next step to analyze Arctic regions would be to include environmental indicators in the models, such as energy mix and renewable energy production and utilization.

[1] According to this estimation, Russia has the highest level of both planned and needed investments among the Arctic countries followed by USA, Canada, Norway and others.

[3] In Russia we used numbers from North-Western Federal District, not the whole country, as a comparative base for Murmansk Oblast’ and Arkhangelsk Oblast’.

[4] Both figures are from the recent BIN report [3]; they are based on statistics from Eurostat, and national statistics authorities of Russia, Norway, Sweden, and Finland.

[6] Our calculations were based on background data from Statistics Norway and Rosstat.